Forming a basic twist isn’t as difficult as many people imagine. The twist cut on a goblet stem doesn’t really need to be accurately marked out. I find simply working by eye is close enough and here’s how. You will need some additional tools but don’t worry, all you need are two or three small round files. I have a “bastard” cut 10cm file, a “bastard” cut 15cm file and a second cut 15cm file. 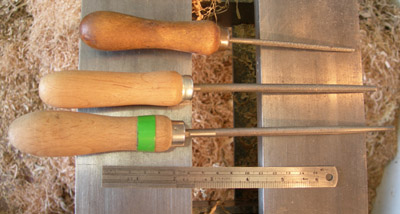 Make sure you have handles on your files before you use them – you can even turn your own!
Turn the lathe off at the main switch, you won’t be needing power for this part. Stand by the headstock and hold the file at the base of the goblet stem at an angle of around 45 degrees. 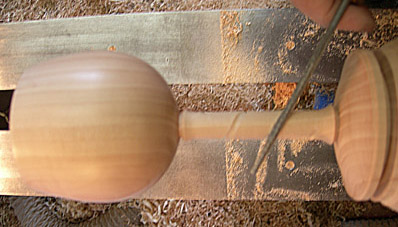 Taking care not to file the edge of your goblet foot, start filing with the smallest coarse file and once a shallow groove has been formed, start to rotate the goblet by turning the lathe spindle by hand. The direction of rotation is the same as the forward direction you usually use on the lathe. Keep filing at the same angle as you gradually rotate and you will see a spiral groove starting to develop. Work all the way up the stem and at the top, stop just short of the point where the file would touch the goblet bowl.
Now for the second groove – position the smallest file half way between two grooves of the first twist (just line up by eye) and hold it at the same angle as before. 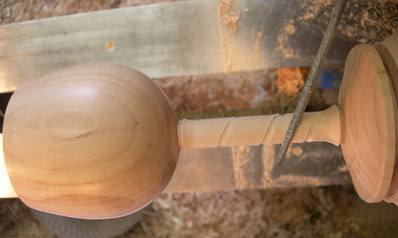 Repeat the filing and rotating process until the second groove reaches the top of the stem as before. Now work from the bottom of the second groove back down to a point in line with where the first groove was started. You can adjust your angle slightly as you go if the groove is looking like it is wandering closer to one side or the other.
Still using the smallest file, cut the grooves deeper by repeating the filing and rotating process again. Once the grooves are deep enough, use the rougher 15cm file to widen the grooves. 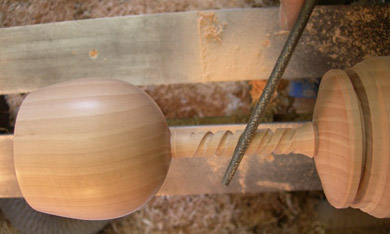 Again with the rougher 15cm file, hold it at right angles to the stem and file across the groove so you remove the corners each side of the first groove, repeat for the second groove. 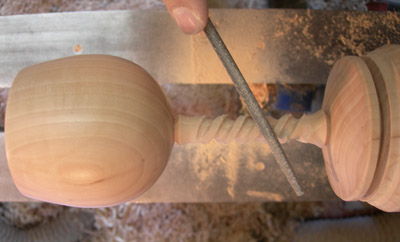 Now switch to the finer 15cm file and hold it at between 20 – 25 degrees and again remove the corners on both grooves. Now with the file at 20 – 25 degrees the other side of perpendicular, remove the corners on the other side of the flat. The easiest way to visualise this is to think of turning a square into a quarter circle by removing the corner at 45 degrees, then removing the subsequent edges at 22.5 degrees and so on.

Spend a little more time with the finer 15cm file refining the curves and shaping the twist how you want it. Once you have got as far as you can, set your lathe speed to around 350 – 500 rpm and sand the twist by following it with a piece of abrasive stretched between both hands. This isn’t as difficult as it sounds as long as your lathe runs slow enough! The abrasive can also be wrapped round a length of dowel if you have some of the correct diameter. Again, vary the angle to cover the whole curve of the twist. Also, make sure you pause occasionally to ensure you don’t always pick up the same groove. Work down through the grits until you are happy with the finish.

Next – Finishing the foot

Back to Shaping the goblet cup